The Black victims of the holocaust 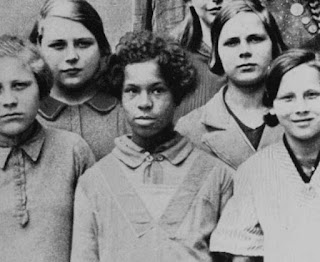 The Holocaust of 1938 to 1945 resulted in the murder of an estimated six million Jews.  However, the Nazi terror did not stop there.

As part of Black History Month, we remember the often forgotten black victims of the Holocaust.
The black population prior to the Nazi regime
The black population in Germany consisted of African immigrants, many of whom came at the ending of the First World War, and blacks who were among the French troops sent to occupy a western region in Germany, called Rhineland.  Troops, white and black, went on to have children with the local women but it was the racially mixed children — the product of black African soldiers and white German women — who were frowned upon heavily. These biracial children would be derogatorily named the “Rhineland Bastards [1,2].”

The Nazis, at the time a small political movement, viewed [these children] as a threat to the purity of the Germanic race. In Mein Kampf (My Struggle), Hitler charged that “the Jews had brought the Negroes into the Rhineland with the clear aim of ruining the hated white race by the necessarily-resulting bastardization.” [1]
A newspaper asked: “Are we to tolerate silently the fact that, in the future, the light-hearted songs of white, attractive, well-built, intellectually superior and lively healthy Germans are to be replaced by the croaking noise of gray-colored, syphilitic mulattoes?” [2]

In 1937, the Rhineland children had approached child-bearing age, and a plan to stop them from producing offspring was swiftly implemented by the Gestapo and the Ministry of the Interior. Initially, the children were to be deported to Africa with the assistance of the Catholic Church. When that plan was dropped, the children were forcibly taken to hospitals where they were examined and, in some cases, sterilized. …
in later years, no trace of the 800 children could be found. In 1978, in the course of research involving victims of the Holocaust, it was speculated that most if not all died in the camps under the Nazis euthanasia program. Under the 1935 Nuremberg Laws, the euthanasia program was designed to exterminate individuals who were considered genetically inferior.[2]

The victimization of black adults in the Holocaust
In addition to mixed children, African and African American adults in Germany were also victims under the Nazi regime.

[African] Hilarius (Lari) Gilges, a dancer by profession, was murdered by the SS in 1933, probably because he was black. Gilges’ German wife later received restitution from a postwar German government for his murder by the Nazis. …
[African Americans] like female jazz artist Valaida Snow, were imprisoned in Axis internment camps for alien nationals. The artist Josef Nassy, living in Belgium, was arrested as an enemy alien and held for seven months in the Beverloo transit camp in German-occupied Belgium.[1]

The total number of African Germans, Africans, and African Americans extinguished during the Holocaust is unknown, but some report hundreds to thousands.