Pair of ‘Structures’ Spotted on Mars 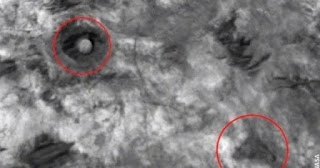 An anomaly hunter studying NASA satellite images of Mars believes he may have found a pair of ancient structures on the Red Planet.
In a posting on YouTube which showcases the possible find, UK researcher Joe White highlights an intriguing crater that seems to sport some kind of circular dome-like oddity at its center as well as what appears to be a pyramid just a few hundred feet away.
The oddities were spotted via the Google Mars program which allows users to explore the Red Planet in a manner similar to their popular service that lets users look at areas all over Earth.
White notes that the area where the potential structures were found is also a location that may be visited in the future by a Mars rover being sent to the planet as part of a joint mission by ESA and the Russian space agency.
To his credit, while the anomaly hunter argues that the ‘structures’ look artificial, White concedes that similar pronouncements have been proven wrong in the past when higher resolution images revealed that suspicious ‘domes’ inside craters were revealed to be sand dunes.
On that note, skeptics say that the newfound dome and pyramid are simply another case of pareidolia playing tricks on wishful anomaly hunters, albeit this particular case in unique in that White managed to find two ‘structures’ seemingly right next to each other.
Link:http://secretsofthefed.com/pair-of-structures-spotted-on-mars/